Welcome! Another week of Tuesday Tales brings another excerpt of HIS LEADING LADY.  Mark Davis gets a chance to play quarterback on his team, Nevada Gamblers. But the starting QB hates him and they have words. Caution - bad language.

HIS LEADING LADY
He made eye contact with his friend, Harley Brennan, a wide receiver. Harley smiled a knowing smile and glanced at the stands. Mark called the play. When the ball was snapped, Mark’s total concentration was on the game. He dropped back. The line held long enough for him to fire a shot at Gam Leadbetter, who was about fifteen yards out, and not covered. Gam plucked the ball out of the air and ran for a few more yards before he was brought down.
Adrenaline surged through Mark’s veins. He was so focused he didn’t even hear the crowd cheering. When the huddle broke, he handed the ball off to Harley who ran for twelve more yards for another first down. Mark was pumped. Again they huddled. This time, one of their tackles slipped up and Wyoming’s middle linebacker broke through the line. He was enormous and charging straight for Mark. 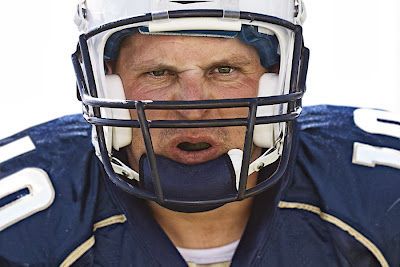 Before he even blinked, his football instinct kicked in. Mark, faked right, then cut left, side-stepping the defender diving for him, and took off. Finding a hole in the defense, he ran for eleven yards, then slid in just before being tackled. The crowd went wild. Mark could do no wrong. Smart enough not to let his luck go to his head, he calmly broke the huddle and took the ball back for another throw. Again he landed a
bullet, this time in Harley’s arms. Touchdown!
A warm feeling of satisfaction traveled through his veins. A peek at the stands confirmed that Penny, on her feet cheering, had seen it all. He removed his helmet and sank down on the bench.
“Don’t let a few lucky plays go to your head, Davis, you douche bag,” Darvin said.
“Luck had nothing to do with it.”
“Call me when you get to my level, in about ten years.”
“Go fuck yourself.”
A stern look from the coach silenced Mark. Darvin made a face behind the coach’s back. I’m not going to let this asshole take away my victory. Turning his head, Mark directed his gaze toward the stands. Penny was watching him. He lifted his hand in a brief wave and she smiled. Darvin turned to see who Mark was looking at.
“You fucking piece of shit! She’s mine.”
“In your dreams.” Mark said.