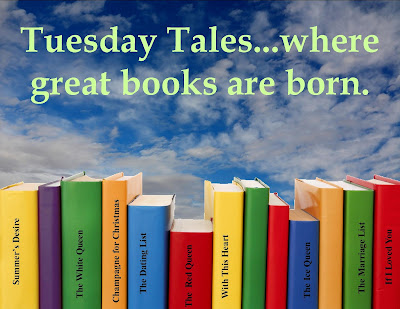 Welcome! This week's word prompt is "necklace." We continue with Maggie and John's story. Thanks for coming! Scroll down for the link back to Tuesday Tales.

Maggie didn’t mean to pry, but the delicate chain with a small emerald in the middle caught her eye. The necklace was beautiful. She’d taken to cleaning John’s room, since they had become friends. She never expected to find something so lovely on his dresser.
“Probably for Gladys,” she murmured to herself. John had been dating Gladys, Mrs. Upton Myers maid for some months. Still, she couldn’t resist holding it up to her neck and glancing in the mirror. The sound of a door closing in another part of the apartment jarred her back to reality.
The last thing she wanted was to be caught admiring something that was intended for someone else. A touch of sadness sprang up in her. She and John were only friends and that was the way it had to stay. He had someone else and she was afraid of getting into trouble. Maggie had to be careful as she was alone in the States, and there was no one here to take her in if she got knocked up again.
Returning to the kitchen, she almost bumped into John. He shot her a warm smile, which she did not return. Why get any closer to a man who was already taken? He caught her arm.
“Whoa. Wait up a second, Maggie. Where you off to in such a hurry?”
“Got rooms to clean.”
“On vacation?”
“The Mister and Missus may have left, but it’s never a vacation for me. If they get back to a dirty and dusty house, it’ll be my last day off.”
“Can’t you take a break for a cup of tea?” He bent down to make eye contact.
“I guess.”
“I put the kettle on.” He guided her into the big, warm room. “You sit. I’ll get it.”
When the whistle sounded, he turned off the flame and filled a pot he had ready. Maggie took four biscuits from a canister and put them on a plate. He joined her with the hot beverage and took the seat across.
“So, when you steppin’ out with Glady again?” She asked, stirring her drink.
John choked on his saliva. “What do you know about Gladys?”
“I know you’re sweet on her and she on you. You’ve been seeing her for quite a while, haven’t you?”
He cast his glance down to his cup. “That’s over.”
“Over? Why?”
He cleared his throat. “I’ve changed my mind. She’s not the girl for me.”
Maggie raised her eyebrows. “Oh?”
“Yep. Found someone better.”
“Who?”
“You.” He raised his eyes to hers.