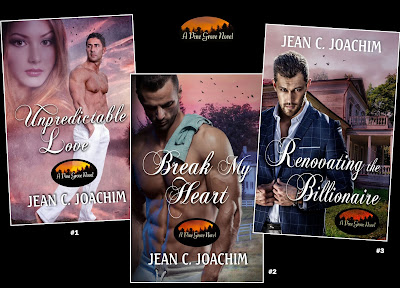 The Pine Grove series is now a trilogy. The first book, Unpredictable Love, is now only $0.99 - for a limited time. 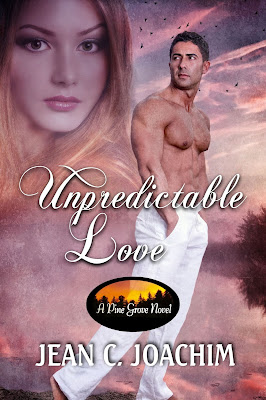 When letters poured in from SSGT Trent Stevens in Afghanistan, Jory had no choice but to correspond. Sure he’d be drooling over Amber’s bikini photo, thinking it was Jory. Since they’d never meet, what harm could it do if she sent him a few letters?

Would her charade boomerang replacing happiness with pain? What started off as an innocent ruse, morphed into a monstrous web of deceit. Maybe unpredictable love was destined to break her heart. 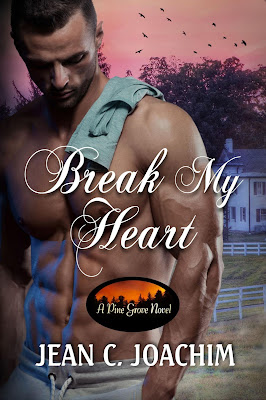 Men envied Breaker Winslow and women wanted to sleep with him. As a top cover model with a budding acting career, he embodied every man’s dream. Living in a townhouse in Manhattan, Rick Breaker Winslow had everything he ever wanted.


When fire ripped through his home, trapping his beautiful golden retriever, Breaker pushed firemen aside to rescue his beloved dog. While heading for the stairs with the canine in his arms, a falling beam crushed them, killing the animal and scarring Breaker’s face.
Life, as the famous Breaker Winslow, disappeared. With his career finished, Rick appealed to his friends –who turned their backs on him.
Broken, despondent, and alone, he takes refuge in a decrepit farm house in rural Pine Grove. Can the man who had success and love around every corner rebuild his life or is escape the only answer?

The newest book in the series, book 3 is "Renovating the Billionaire." 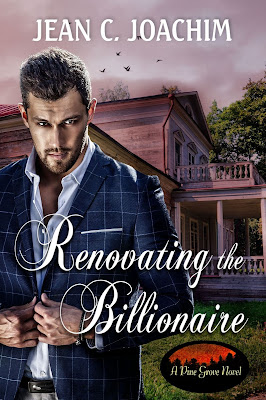 Get rid of the house and sell the land. Bulldozing the broken-down mansion billionaire Stryker Alexander West inherited solves an annoying problem. Busy launching a new venture, he doesn’t have time to waste on sentiment. Taking down the historic building should be a slam-dunk. But Stryker comes up against a stone wall in the form of Landmark chair, Jess Lennox.

Supporting her brother and juggling a hard life, Jess refuses to approve a permit to demolish the old house. No way will she let arrogant, wealthy Mr. West destroy her dream. Unwilling to accept defeat, Stryker’s confident he can prevail.  He insists staying in town is about winning and has nothing to do with heat from a determined blonde.

Too stubborn to budge, Jess holds fast, struggling against her attraction to her worst enemy. Will the winner of the battle lose at love?

Aunt Minnie had been his father’s big sister. She was lively, happy, and inquisitive, always poking into his personal business and giving him unwanted advice. She’d been a one-woman matchmaker, trying to marry him off until two years ago, when he turned forty. Then even Minnie West threw in the towel, declaring that he was not marriage material. So what? He doubted he was missing anything other than a messy, expensive divorce.
Stryker West enjoyed playing the field, taking his pleasure whenever and wherever he could. He’d never been at a loss for female companionship. His billions, his most attractive quality, he assumed, made marriage a risk he preferred not to take.

Meet Jess Lennox, newly minted Landmark Committee chair of Pine Grove
Like there are any buildings to be landmarked anyway,” someone muttered.
“Oh, but there are,” Jess replied.
“Like what?”
“Like that big old house on 113,” she said.
A murmur ran through the crowd.
“Excuse me, Miss,” said an unrecognized, deep voice. Jess turned toward the man.
“Chair recognizes Mr. West.”
“Do you mean to say that you are landmarking that house?” he asked.
“Damn right I am. Of course, I will give it further study. But as of right now, my recommendation to the Town Supervisor is that no one bulldoze that building.”
“But it’s decrepit. It’s falling down,” the stranger argued.
“Nope. It’s completely stable. And it dates back to the early 1800s”
“That building now belongs to me, and I’m planning to take it down.”
Jess’s heart skipped a beat. Sweat broke out on her forehead. Take it down? Destroy her home, her dream? No way!
“Think again, Mister. No one’s touching that house unless it’s to fix it up.”